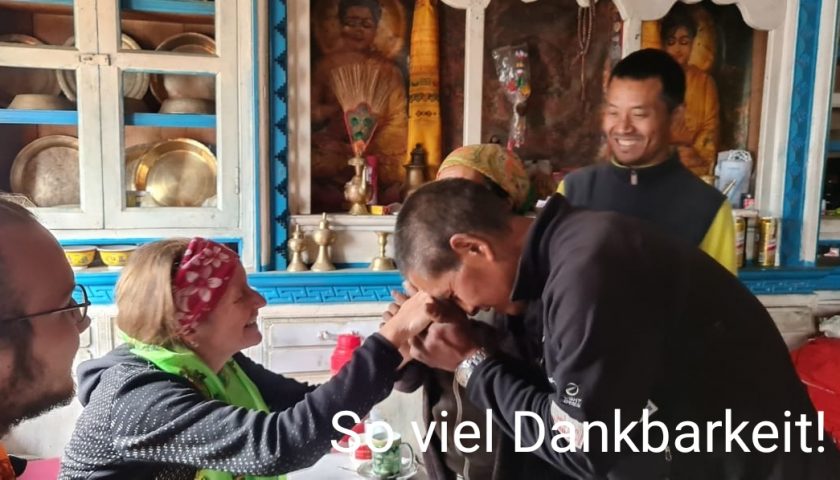 …, where the Corona Numbers seem to be „exploding“ again. Let’s see.

Here fnally the update on all the things which have been achieved and done during the last couple of weeks while out in the unusually quiet SoluKhumbu Valley. Usually there are heaps of Trekkers and Climbers out there heading for Everest … or anywhere near…but do to corona…not this year. A couple of expeditions were on the way.. But most Lodges empty and locked…- new built houses.. all designed to welcome the masses of the Tourist Year 2020 …well.. needless to say.. heaps of people suffer! It seems as if the – Prince of Bahrain expedition is the only one which has actually made it into the news ever since he tried to get into the country with heaps of vaccine in his carry on luggage.. 🙂 ( – – – for whatever reason he brought that in…. noone would ever assume he was trying any kind of corruptive act here… maybe just trying to get a bargain on the permit? – or be safe in the mountains? )
more important to us the news concering our children here:

1. Maya who had stopped going to Marshyangdi School last spring.. (before Corona …) has been „found“. She has left Nepal to work in Dubai for two years, which the principal of the school had already implied, when I met him the last time. Anyhow.. she is old enough to decide and at least we were able to support her with a basic education so she will get less ripped off … wherever she is .. whatever she decides to do. I sure hope she will be lucky and happy and making the living she is longing for. As much as Nepali woman can wish for.

2. Kandi, has successfully completed her second school year at Kailash Bodi School in Boudha, although she missed half of it due to the lockdown in Kathmandu. Schools were closed and Kandi was unfortunately one of the children who had no access in the remote mountains where „Hill“ is situated. Luckily Kandi was allowed to return to KTM towards the end of the school Term. First she tried to participate from Nima’s room, but even there was no reliable Internet available. We are happy that she was allowed to move into the Hostel with her being the only student there besides the caretaker and her daughter. She passed all her final exams of the school term and I am very happy she gets the reward for her hard work in her report card!

3. Kandi’s brother Change will now – most probably – follow her to Kathmandu. He has finished the five years of village school and father Pemba has asked us to maybe help him to go to the same school and hostel in Kathmandu like Kandi. Next year we hope the youngest Kanchi can follow, too. I assume that Change will struggle a little more to adapt to all the lessons in ENGLISH… but I really believe in this one, too. I think he will do his best.
For the family this means, they have to let go of another child… and hope for the best. I realized how deeply Kandi is missed when Pemba talked to her on the phone with Tears in his eyes. Now.. another one is allowed to move far away.. to have a chance for a better life. It is incredibly sad, to see what sacrifices the parents have to bring.. but there is just no good school anywhere near. And at least I know Kailash Bodi School is a good one! I feel blessed to have met Karma the headmaster… a long time ago. She is an incredibly kind and brilliant woman!

4. Some of „our“ children are not in the village anymore, whenever they have finished the five years of basic school in the village … (whatever that means in a village school where school is over after 2 lessons… – whatever the government is doing there.. I really think these people need to complain… to have some better teachers up there.. – but.. sigh.. – Nepal – Nepal… We are always trying to see as many of our sponsored children as possible and the cool thing is, that most of the parents or guardians are also trying to catch up with us on this annual regular base. One reason why I have the feeling I MUSTgo to Nepal once a year.

5. The trip to the village was perfect again, althought he weather had started to be hazy and we could not see the „real“ mountains for most of our way there. Once again 12 hrs. bumpy roads, with the Jeep to Paphlu, from there the next day by Jeep a little further and although the roads have been built further into the valley, we got out to start with the same walking routine like all the years before. (One thing I need… to prepare myself for the village …slowly!). Nimas father met up with us again and carried some things for us. (I brought once again some good warm clothes with me that had been given to me before my departure.. )…

2 days walking and finally we had managed that last passage.. .back down into the valley, climbing over the rocky mega landslide and straight back up to the village… exhaustion couldn’t be hidden, but since we were welcomed with a special Sherpa puja (Prayer).. we still had to wait before we were to pass through the wonderfully decorated gate. What joy and happiness.. and this just lasted for the next three days. With the men cooking a pig and heaps of other beautiful food, buckets full of Chang (Sherpa „homebrew“) were also prepared and the Sherpa Party which everyone had been longing for was ready to „rock’n roll“. Food for everyone (everyone had put in some money for the fest!)… and Sherpasongs and – dance, then Sherpadisco in the little courtyard and lots of happy faces, dancing and singing. We also distributed the envolopes with the sponsorship money right on this first day since we were on a pretty tight schedule (longer than three days in the village are difficult for me..). There was no escape from being offered Chang after Chang or beer if declined, or milk or chiya or coca cola.. each one of the sponsored children’s parents expressing their thankfulness in giving one or the other to us along with the Katas which soon covered our bodies almost fully. What an honor, what laughter, what happiness,.. just in case someone might want to know.. social distancing is unknown here. It is life as it is, good and bad, happy and sad but luckily we were part of one of the happiest days for all of them in 2021.. and probably since 2020 Corona season had started..
The next day was busy with the preparation for distributing the rice sacks to each family. Well.. first of all the donkeys had to bring them into the village. And there was no easy way for them to walk on. Thank God they had all made it safely into the village. I think the Shop owner was also quite glad that everything had arrived safely. We had once again a sack full of Katas to be folded at the end of the day and a lot of happy people who could at least have a belly full of rice for a while. Some had walked a long way, from even more remote places to then carry that heavy sack back home … Another day with visitors coming and going, requesting help for their children, or saying thank you for helping already, we were eating our way through from one house to the other. So much REAL food… it was wonderful.. but for me a little bit much :). Luckily we had brought Lars a friend from Germany along, who loved to eat …whatever I could not finish.. or at least most of it 🙂
After three days of happiness the morning of our departure is just as busy but the feelings and emotions change. Watery eyes, people leaving the room for a moment, good byes, last breakfast, Chang, hellos and good byes.. Katas, Katas, Katas.. for a safe journey.. and then.. at some moment in time it starts being hectic.. the quicker the better before everyone is crying… Noone would admit it, but Sherpa good byes are quick not to be overwhelmed by the emotions. Life is hard.. so … get on with it! ..
What made it easier for us was the fact that Dendi, one of our sponsored kids and his guardian auntie Doma, was walking with us.. for two days.. and we were also taking some goats … :). We also knew that we would meet up with Nima’s Papa and Pemba on the way back.. and some of the children came to catch up with us, too!
Well.. mission complete.. for this year.. We are still signing up Change for secondary school her and then we are paying the bills for Nima’s little one in preschool, who is as of today in „online class“.. (I wonder how that feels for 4 year old… well… crazy world.. due to the Corona era…. – here, too!)

Thanks to all the people who are supporting us, whether you are sponsoring a child, supporting us through positive vibes or donations.. without you none of this would be existing! I love to hear from all of you. We still have about 10 children waiting to get some of that regular help 10 euro a months.. or if you can aford 25 month we can offer a „shared sponsorship“… Change and Kandi’s school costs are about 1200/1300 $ a year..

Thank you for reading this and caring!